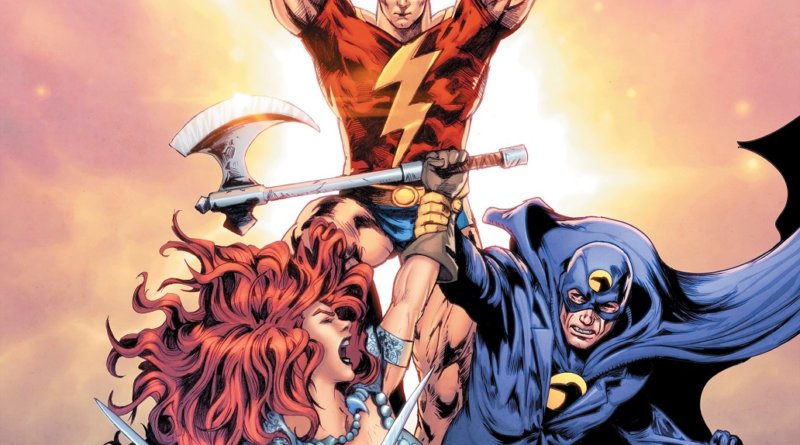 From the world of the best-selling trilogy of books and the hit Netflix show comes a new chapter in the ALTERED CARBON universe! In the future, bodies can be changed like clothes, giving life an entirely new meaning—or lack of meaning.

Takeshi Kovacs—once a member of the Envoy Corps, the elite, deadly troops of the Interstellar Earth Protectorate—now finds himself imprisoned . . . both in a jail and in an extremely weak body. When he learns that Envoys he served with in a battle he somehow can’t remember have been stolen and sold to one of the richest people in the universe, Kovacs vows to rescue them and get revenge. Leaving behind a staggering body count as he blazes across the galaxy, he wonders why he has a hole in his memory . . . and what secrets that gap holds for understanding his future and himself.

The past meets the present with the future of literally everything at stake! The warrior Red Sonja has a plan to keep freshly killed wizard Kulan Gath from resurrecting himself again — but when the plan backfires, it allows a whole new kind of Chaos! to infest the Hyborean Age! Will these new beings be any easier to deal with than Kulan Gath, or has Sonja called a worse evil to her world? It’s the first chapter of a brand-new quest for the She-Devil – and it may be her hardest yet as for the first time ever, Red Sonja meets the badass characters of Chaos!

Picking up from the end of volume 1.

“Seduction of The Innocent” continues, taking us back to where the series began–the doomed flight of Affirm Air 1969. A warning comes to Vampirella too late as a cadre of her greatest foes execute their plan to destroy the life that she’s built for herself on Earth. But who’s really behind them? Lilith, or Vampirella’s half-brother, Drago? Collecting issues #9-14 of the critically acclaimed series by Christopher Priest, Ergun Gunduz & Giovanni Timpano.

THIS IS THE MOST IMPORTANT COMIC BOOK TO EVER COME OUT IN THE HISTORY OF THE WORLD. Starring: RED Sonja, BLUE Sonja, GREEN Sonja, ORANGE Sonja, SAINT Sonja, HELL Sonja, and MANY, MANY, MANY MORE!

An evil god punishes Sonja’s across dimensions. What’s the punishment? SONJA’S MUST KILL OTHER SONJA’S. The battle for SONJA SUPREMACY BEGINS IN THE EVENT OF 2021, by CHRISTOPHER HASTINGS (Gwenpool) and PASQUALE QUALANO (DIE!NAMITE)!

Red Sonja’s Hyrkanian habitat is turned upside down as her greatest enemy becomes… her greatest admirer?!?!  You thought Kulan Gath being evil was frightful, wait until you see him head-over-heels in loooove!!!  Sonja will face her greatest challenge resisting the urge to kill a love that Can. Not. Die!!!!  Featuring the Shakespearian sonnets of Bill Willingham, the luscious lines of Giuseppe Cafaro and crush-ridden covers by Joe Linsner, Jimmy Broxton and cosplayer Savannah Polson, you’ll feel like cupid’s hiding in your pull list!

In a terrifying alternate reality, Dracula and Vampirella have wed and the world has been plunged into darkness. Humanity has become little more than cattle and Vampirella has sworn a sacred oath to her Husband and King not to fight against Vampire supremacy . . . but a rebellion is brewing in the shadows. Who is the mysterious rebel Bloodwing, and why does Dracula, and the vampire race, fear her so?

A tale of Love and Death ripped from the Book of Prophecy.

Sonja The Red tries to kill the strange outsiders that have invaded her lands. But Sonja and these “heroes” have a common enemy…a daemonic presence with strange technologies, that requires human sacrifice! By DAN ABNETT (Justice League Odyssey) and JONATHAN LAU (Red Sonja)!

Vampirella and her fellow heroes patrol a (retro) future world, full of bizarre villains, creatures, threats. But when danger strikes, will Vampi side with her team…or consider aligning with the darkness? By DAN ABNETT (Justice League Odyssey) and PAUL DAVIDSON (Annihilation)!

It all comes to do this! Our motley band of heroes from across space and time has made a final stand in an isolated monastery high in the Himalayan mountains against the zombie plague sweeping the multiverse…as the secret hand behind the zombie plague at last reveals itself! But is it too late the worlds of Dynamite from an unstoppable wave of undead?

“Interstellar” concludes with Vampirella having to once again choose between saving her people, a world dying of blood drought, and protecting her adopted home world of Earth. The Vampiri have developed technology enabling them to breach the great divide between worlds, giving the dying Vampiri access to an endless supply of human “cattle.” But which side will Vampi choose?

Vampirella is clearly not herself (for reasons we won’t spoil here!) and neither is ex-girlfriend Victory, the “new” Draculina who has experienced a genuine religious conversion while spying on the City of Sacred. But can Draculina hide her newfound faith from her cohort of nefarious sisters, which includes a suddenly brutal and demonic Vampirella? Also, continuing this issue: just who is the “half-vampire” agent of chaos called CHASTITY?

Mark Russell’s epic run on Red Sonja comes to a close. Sonja The Red’s reign is tested as never before, and will set the stage for a new tale, in next month’s Red Sonja #25…

The long-awaited battle for King’s landing begins, as Stannis Baratheon sets the weight of his navy against the walls of the capital city and the strategies of Tyrion Lannister. Inside the Red Keep, Queen Cersei holds court with the nobles seeking refuge against the oncoming horde. Only one lesson will be learned from this issue – everything burns. But who will live or die remains uncertain. Prepare yourself for the siege of a lifetime in another chapter of George’ R. R. Martin’s epic fantasy series – A Clash of Kings.

The fiery conclusion as Sonja’s Death hangs in the balance! Red Sonja caretaker Luke Lieberman concludes his latest opus featuring the fiery-haired heroine in another chapter of her early adventures. He’s joined by fan-favorite Sonja artist Walter Geovani (Death-Defying ‘Devil, Clean Room) whose prolific work on the character goes back over a decade, most celebrated being his run with Gail Simone!

The mystery of Adam Van Helsing’s return intensifies, as Vampirella continues to struggle with the bestial side of her nature.  Mistress Nyx realizes that Vampirella isn’t the only enemy she should be concerned about.  And Lord Mazarin embraces his gift from the Lords of Chaos and the world slips that much closer towards oblivion. 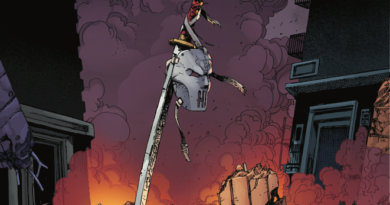 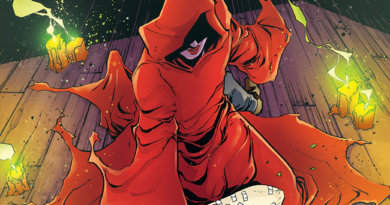 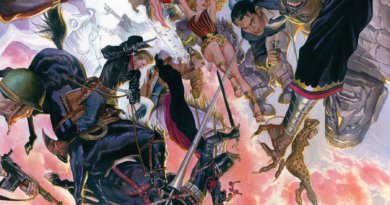