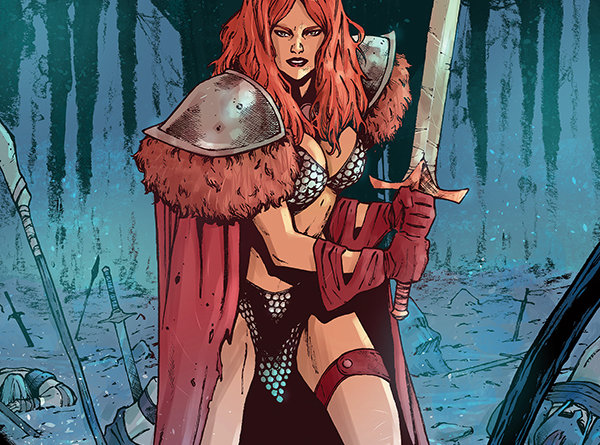 
The Dynamite April 2021 solicitations are here! Red Sonja the Superpowers and Dark Powers continue, Goosebumps gets an art book, Death to the Army of Darkness also gets a trade paperback, and much more!

THE ART OF SKYCAPTAIN AND THE WORLD OF TOMORROW Hardcover

SKY CAPTAIN & THE WORLD OF TOMORROW burst into the sky and onto theater screens in 2004. With it came groundbreaking methods and techniques that would change the way movies were made.

The real story behind the film began many years earlier and in Kevin Conran’s Art of Sky Captain & The World of Tomorrow, fans will be treated to behind-the-scenes stories marking the movie’s unique journey to the screen.

As the first of its kind, this landmark film embraced the look and feel of the old serials even as it pushed the boundaries of modern filmmaking technology. The film would inspire a whole new generation of creators eager to adopt its innovative techniques—techniques that are now commonplace in every studio in Hollywood and around the world.

This comprehensive retrospective is the first official collection of the film’s artwork sourced from Kevin Conran’s private collection and spanning over 20 years of the movie’s history.

THE ART OF GOOSEBUMPS Trade Paperback

Featuring tons of fun facts about the series alongside a walkthrough of all books and covers in the Goosebumps collections, this art book is a must-have for old and new fans alike!

In the summer of 1992, Scholastic tasked two terrifyingly talented artists with creating the cover paintings for the books that would premiere the Goosebumps series. At that time, four books in the line were being market-tested by the publisher to see how young readers would react to R.L. Stine’s particular brand of humor-tinged horror. One element that was sure to catch the attention of little eyes everywhere was striking cover art, and, boy, did they find it!

The imagery provided by the covers of the Goosebumps series is part and parcel to the 90s Kid zeitgeist, helping to create a visual brand for R.L. Stine’s smash-hit horror series. The covers helped set the tone for the numerous adaptations of the series, including a television series, a theatre experience, and, more recently, blockbuster films!

She is the red-haired she-devil with the sword. They are the green-skinned invaders from the red planet. Yes, those dastardly Mars Attacks Martians are attacking again, and these are the Martians of old, the Martians of the Hyborian Age. And so, it’s up to Red Sonja to stop the attack. But how will steel, strength and savagery stand again laser guns, sci-fi technology and weird, weird Martian science? Only one way to find out! Buy this freakin’ book!

A homeless man is mysteriously abducted. A journal is left on the edge of a subway platform, filled with stories about a world that doesn’t exist. Not far from here a scientist is murdered in cold blood. The only clues are his burned down lab. A magnetically propelled motorcycle, and a man walking around New York City with the last living falcon on the planet.

Imagine a world where your every thought, your every move, is filtered through The Central Lens Network. Now imagine being a twelve-year old boy and discovering a special pair of lenses that allow you to access this network undetected. This is exactly what happens to Matthew Glen the day his father is murdered then two years later mysteriously appears back in his life.

In a style that echoes back to the Dark Age of Comics when graphic novels were coming into an art form of their own, “Myopia” merges science fiction with noir steampunk into a thrilling alternative reality, where government and big business use entertainment devices to cover up a new authoritarian landscape.

DEATH TO THE ARMY OF DARKNESS Trade Paperback

An all-new story by RYAN PARROTT (Mighty Morphin Power Rangers) and JACOB EDGAR (Red Sonja)! It’s been six months since the events of the Army of Darkness film…Ash is just trying to settle down and get back to his groovy ways. But dammit, DEADITE-POSSESSED strangers keep attacking him at every turn. Why is evil following everywhere he turns, and what happens when an awful splinter spell causes Ash to become…TEAM ASH!?

An all-new story, spinning out of the smash hit RED SONJA title written by MARK RUSSELL!

In order to become queen, Sonja The Red had to defeat an evil emperor. But that emperor had a son. And that son will do ANYTHING to exact his revenge…even if it means embracing horrible magics he does not understand.

Don’t miss out on this series that will affect the Sonja series for years to come! By MARK RUSSELL (Red Sonja, Year Of The Villain), BRYCE INGMAN (Edgar Allen Poe’s Snifter Of Terror) and CRAIG ROUSSEAU (The Flash).

So yeah. Vampirella and Purgatori. Vampi, the Vampiri with a conscience and Tori, the lady-shaped creature who eats conscience. Working together? Not really. Working towards a common goal, while considering tearing each other’s throats out, more like! And that common goal is to stop Lilith and her near-infinite minions from having their rough, rude way with the entire human race. The stakes are big enough… and sharp enough. Everybody’s in… it’s time to ante up.

James Bond is in the USA…but NOT as part of Her Majesty’s Secret Service. Shockingly, he’s there as an Agent of SPECTRE, sent to eliminate an upstart rival SPECTRE boss at the bidding of Ernest Blofeld himself! The leverage Blofeld has against Bond is a threat to the life of one of the few people in the world Bond can trust… but that friend may have the interests of Bond’s target as the higher priority!

Sonja’s wage war on one another across the infinite and varied expanse of Hell. And the prize, for the war’s winner? THE CHANCE TO MURDER RED SONJA.

It’s not over! “Interstellar” became so big a story, we needed more issues to contain it! In this, the penultimate chapter, the secret cause of Drakulon’s long-ago ruin is at last revealed, so if you think you know what led that world to become an inhospitable desert, think again. Of course, this is all assuming you’re not still in shock after the “oh my god!!!!” ending of last ish!

Sonja beholds the futuristic wonders of The Project’s interdimensional home base! She’s given high-tech weapons and battle armor, an education on metaphysics and magic. Sonja is one of the greatest warriors of all time; what she is not…is a good student.

By DAN ABNETT (Guardians Of The Galaxy) and JONATHAN LAU (Red Sonja)!

VAMPIRELLA VS. THE BLACK TERROR!

The Project is convinced that Vampi has turned villainous and will stop at nothing to contain her!
By DAN ABNETT (Justice League Odyssey) and PAUL DAVIDSON (Silver Surfer)!

Ten years have passed. Sonja is uninterested in battle…she’d rather eat meat and drink ale. But The Red’s hand will be forced, and she will answer the call to battle.

Abaddon learns that he is part of a much larger plan. Recovering from her recent illness, Nyx realizes that she isn’t as powerful as she used to be and must do something about it. The Armor Infernal has begun its march, and Vampirella, and her allies embark on their mission to Nyx’s tower—the final confrontation between the forces of order and Chaos is about to begin.

While the battle for the crown reaches a fever pitch, Sansa plays hostess for the Lords and Ladies of Kings’ Landing within the Queens ballroom. Meanwhile, the forces of Stannis rally after the devastating burning of the Bywater, and only Tyrion and a small assortment of soldiers are willing to stand against them. The sun will soon rise, and only then will it be known who will live and who will die in this dramatic adaptation of George R. R. Martin’s – A Clash of Kings. 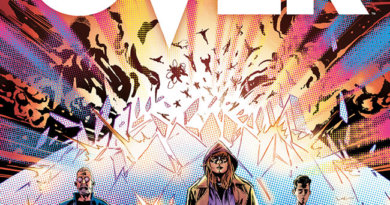 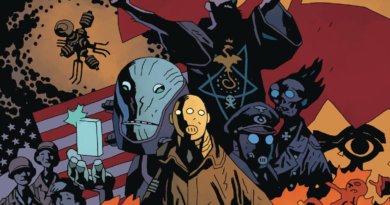 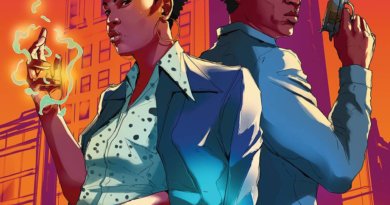