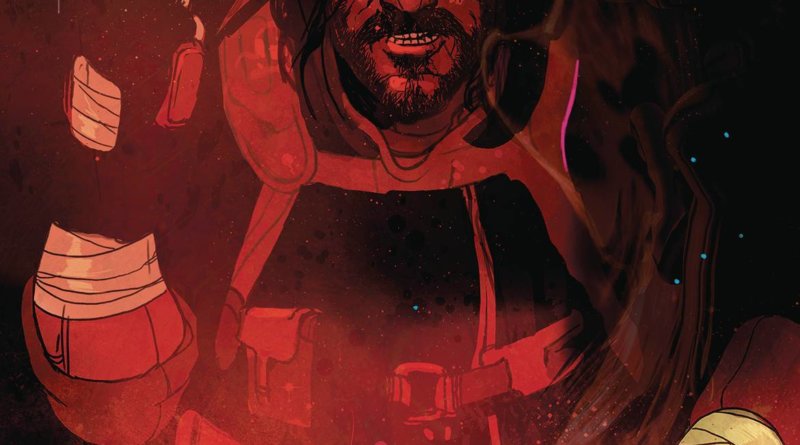 The Boom Studios June 2021 solicitations are here! Power Rangers marches on, Something is Killing the Children continues as well, BRZRKR and Buffy keep heating up, and much more!

CAN LOVE OUTFLY THE SHADOW OF WAR?

Jay wants nothing more than to fly the skies in perfect solitude and with perfect freedom.

Or so he thinks, until he crosses paths with a mysterious thief named Fix whose tricks and charms draw him into the struggle against the looming aviation guild to which Jay owes his very being.

As Jay becomes further entangled in the turbulence of Fix’s cause, each man must learn to navigate shifting allegiances, the fight for freedom, and the greatest adventure of all – love.

Award-winning cartoonist A.C. Esguerra presents an unforgettable debut graphic novel for fans of The Prince and The Dressmaker and The Sacrifice of Darkness, about finding the courage to fight for what you believe in.

Set during the fifth and sixth seasons of Buffy the Vampire Slayer television series, the Scooby Gang deals with two of their greatest tragedies – the death of Joyce Summers and the death of the Slayer herself, Buffy.

But as the unlikely pair dig deeper into the secret cabal, they will find a threat that is much larger – and closer to home – than either had ever imagine.

THERE’S NO ESCAPING THE PAST.

The truth about the Unification War is fully revealed as Mal remembers that saving the day always comes with a high cost. That goes double for saving the entire ‘verse.

Indeed, Mal, Zoe and the crew of Serenity will be forced to make an unlikely alliance with one of the most ruthless, terrifying people in the entire ‘verse: Ma Reynolds!

CAN THE LUMBERJANES COMPLETE THEIR WISH LISTS BEFORE THE END OF SUMMER?

With the end of summer rapidly approaching, Jo, Mal, Molly, April, and Ripley decide to embark on one final adventure, finishing up their summer to-do list with a bang!

But no one’s ready for the shocking secret force that’s heading straight for the ‘Janes!

WHO IS THE NEW GREEN RANGER?

Still reeling from this discovery of the Green Ranger’s true identity, the Mighty Morphin team
must face a new threat with a secret connection to Zordon’s past…and the potential to destroy all their futures!

A new enemy is rising, one tied to the secret history of the Power Rangers and it will take every member of the new team to defeat them, forcing the Rangers to turn to their greatest enemy – Lord Drakkon.

But is Lord Drakkon ready to betray the New Power Rangers or is he truly on a path to redemption?

Who Can Stop The Chimera?

Five individuals bound by a cult-like hivemind, they terrorized small towns with their horrifying supernatural sense-based powers, leaving death and destruction in their wake.

Regan, one of the Chimera, escaped and has been in hiding, with her murderous eyes bound, overcome with guilt.

Until now… when a victim from her past forces her to hunt down the other four of her kind.

New York Times bestselling horror writer Cullen Bunn (Harrow County) and artist Jonas Scharf (Avengers Of The Wasteland) reunite to unleash a supernatural horror series for fans of Killadelphia and Stillwater rooted in the way we process the world – our senses.

What secret in Berzerker’s past holds the KEY to his immortality?

The last piece of B.’s tragic origin and the fate of his parents are revealed as Diana continues unearthing his memories, prompting a new mission in the present day.

Will this one unlock the mystery that is his existence? Or will B. be cursed to wander the Earth forever?

Who watches the Watcher?

Rupert Giles has been many things – Sunnydale’s foremost occult expert, high school librarian, mentor, and father figure – but Buffy and the Scooby Gang are totally unprepared for… Giles the vampire.

With the Watcher’s cunning, experience, and intimate knowledge of the Slayer – will Evil finally prevail?

What if Luck was quantifiable, and something everyone was born with?

Everyone, except the Unfortunates – teenagers born with absolutely zero luck. Now with the world mysteriously plunged into chaos and reality itself threatened, they will be our only hope to save the world.

Our last hope is those with no chance of success… the only thing anyone can wish them is Good Luck.

When their investigation into the role of one of Ravnica’s biggest Guilds in the assassination attempts on their lives lead Planeswalkers Kaya, Ral, and Vraska deep into the Undercity, they will need to succeed in the impossible – uncover the location of Duskmantle, the Dimir guildhall, and survive to tell the tale!

Meanwhile, the assassin is amassing guild members to betray their own Guilds, even as their true motivations remain a mystery…

Answering Zordon’s call, the Phantom Ranger investigates the aftermath of an Empyreal attack.

Only to discover their connection to an ancient evil he encountered long ago… which may have finally returned to threaten the entire universe.

What if Magical Girls weren’t Earth’s champions at all?

Aoe, Thel, and Gen, better known as the Lovely Trio, first burst onto the scene five years ago when they saved Earth from a surprise space monster attack!

Since then, everyone, including Gigi, whose brother died as a bystander in a Lovely Trio battle, idolizes them as superheroic pop icons.

But when Gigi witnesses the Lovely Trio battling a monster firsthand, she sees something that causes her to question everything she thought she ever knew about her heroes!

A magical new series from the team behind Pandora’s Legacy, writer Bones Leopard (Identical) and artists Kelly & Nichole Matthews (Just Beyond), that’s perfect for fans of Sailor Moon and Wynd.

Can Wynd brave the wilderness to save his friend?

As they cross the sea to Northport, Wynd and his friends are attacked by a mysterious enemy. Will Wynd rise to the moment and if so, at what cost?

The BIGGEST Buffy story of the century continues!

What if you KNEW your life could have been different?

Buffy and the Scooby Gang get a glimpse into how different their lives might have been and must confront the choices that lead them to this point, even as they grapple with their understanding of everything changing forever.

Meanwhile, Giles discovers ancient forces are at work, pushing the Slayer and her friends further and further down the rabbit hole…but to what end?

Duncan Idaho has a bad feeling about the upcoming celebration at Castle Atreides, but will anyone listen to the young boy?

And how is it connected to Leto Atreides meeting his destiny?

Meanwhile, Baron Harkonnen will have to contend with his own destiny and the consequences of his retaliation against Reverend Mother Mohiam.

Will Eve escape the remnants of New York City in order to save her father and restore life to a dying planet?

Accompanied by Wexler, Eve must stay one step ahead of the mutants stalking them who want to consume them.

But when they are separated, she will discover that there are things even more terrifying in this new wasteland.

The crew of Serenity make first contact with the natives of The-Earth-That-Was, and like Captain Mal in his prime, they get off on the wrong foot.

But will Captain Kaylee be able to find peace by doing something that would have been unthinkable for Mal?

Meanwhile, Zoe dives deep into what it means to be a Washburne.

It’s been 20 years since the events of Firefly, but trouble still follows Serenity.

With her mother Zoe captured by the Blue Sun Corporation, Emma will have to choose between her crew and her family…

And her choice will have her looking for help in the most unlikely of places… and from the most surprising source.

Can the Norse trickster god, Loki, get the legendary god of thunder, Thor, to embrace his feminine side?

When Thor’s hammer ends up in the possession of the King of the Giants, only his clever brother will be able to aid him in retrieving it, but only if Thor can use his brains rather than his brawn.

Real-life siblings Robin Kaplan (The City on The Other Side) and A.L. Kaplan (Full-Spectrum Therapy) present the next standalone chapter of the Jim Henson-inspired epic limited series, with a different acclaimed creative team on each issue!

The Family of the Sun turns on Lux.

Leading to a final confrontation between him and Teresa.

And with it, the chance to restore the natural order.

More years have passed when Laila Starr, the now-mortal reincarnation of the avatar of Death, once again crosses paths with the future creator of immortality.

This time at a party where the young man will have a life-altering experience that will shape him for years to come. Will Laila change his path in this one night, or the other way around?

Will the Power Rangers be able to save Angel Grove from Lord Zedd and his Putty Primes?

With Tommy’s life on the line, the rest of the team will have to rely on new allies with their own agenda.

Meanwhile, past and present collide as another player finally reveals themselves and makes their move…

Whew! As Bog, Pez, Zep, Gurh, and Utzu catch their breath from their hijinks and misadventures, the Orcs hatch a plan to get back home.

Except that Pez and Zep aren’t sure it’s even worth trying to go back.

But the debate may be moot as they are literally swept away and brought face-to-face with… destiny?!

There is nowhere left to run and no more time to prepare as the new Power Rangers must stand off against one of the Empyreal… with the fate of an entire planet at stake.

And when the Omega Rangers discover the true nature of the threat to Earth, will they be able to warn their former teammates in time?

Plagued by day terrors and visions of a drenched woman, the girls search for answers about Proctor Valley Road at another haunted spot, the abandoned Haven Bakery.

Their inquiries into the spirit world will lead them to the local tribal reservation, but not before Rylee and August’s feelings for the same boy threaten to tear the group apart…

With the first secret revealed and the world now watching, how much longer will the Order’s remaining members be able to remain hidden?

Casper and the surviving Keepers and Holders retreat once more to a remote safehouse, even as Amon and the Seekers close in on them. Can the Order survive with a mole in their midst?

SOMETHING IS KILLING THE CHILDREN #17

What turned young Erica into the monster hunter she is today?

Discover Erica Slaughter’s true origin as she is further initiated into the House of Slaughter. But will she be sorted into the prestigious White Room, or the dreaded Black Room with her new nemesis Aaron?

Thanks to demons and ghosts, Cape Grace is living up to its reputation as the most haunted town in the USA.

But now Gus, Ko, Astrid, and Noa are beginning to suspect local clergyman, Father Lucas Von Brandt, and his congregation may not be what they claim to be.

Can the Specter Inspectors save Cape Grace from itself… without making the ultimate sacrifice?

WE ONLY FIND THEM WHEN THEYRE DEAD #7

Marlyn Chen, Ambassador for the Inner Worlds, arrives at Malik’s Flight to broker peace between the Harvesters and the Worshippers.

When Jason Hauer, one of the fated Vihaan II crew, is pulled into these talks, he will soon discover that like all politics, nothing is as it seems… 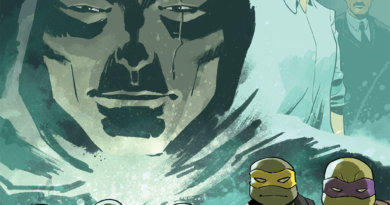 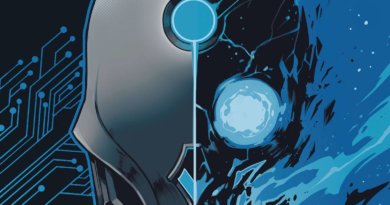 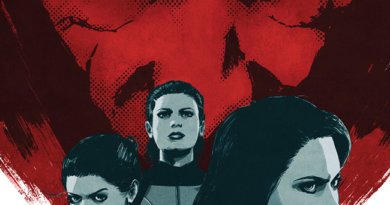