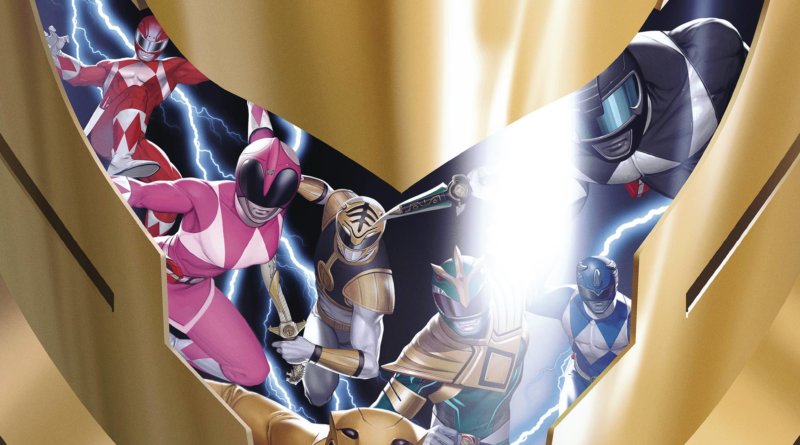 The Boom October 2021 solicitations are here! House of Slaughter begins, Buffy continues, Mighty Morphin and Power Rangers march on, and much more!

SPARK WITHIN FORGE EMBER IN THE ASHES OGN HC VOL 02

Before they were torn asunder, Laia lived happily and quietly with her Nan, Pop, and brother Darin within the Scholar district of Martial-ruled Serra.

Although Laia is afraid to venture outside her home due to the heavy Martial presence, Darin loves to explore all parts of their home city… even those that are forbidden.

A chance encounter with famed swordsmith Spiro Teluman, who sees in Darin a talent for forging weapons, leads him down a path that pulls him away from his family but towards hope for his people.

Meanwhile, Laia is forced to take her brother’s place accompanying Pop to combat a dangerous illness spreading quickly through Serra. When Laia discovers a surprising cure, will she brave exposure and the heavily-patrolled streets so she can save the city and someone she loves?

This all-new original graphic novel set in the world of the New York Times bestselling An Ember in the Ashes novel series reunites novelist Sabaa Tahir and co-writer Nicole Andelfinger (Dragon Prince: Bloodmoon Huntress) with artist Sonia Liao (The Curie Society) to reveal the untold story of rebellion forged in the heart of the Empire!

The Chimera are five young people that possess incredible powers stemming from the five human senses. They are bound by a cult-like hive mind and leave death and destruction in their wake.

Regan, one of the Chimera, escapes the group and hides in cheap motels and dive bars crippled with the guilt of her past. But the tables turn when a former victim of the Chimera, Hannah, appears and forces her to hunt down the other four of her kind.

New York Times bestselling horror writer Cullen Bunn (Harrow County, The Empty Man) reunites with his Bone Parish co-creator, artist Jonas Scharf (Avengers Of The Wasteland), to unleash the first chapter of a supernatural horror series that explores how we process the world through our senses.

It’s the 1960s and Teresa is a young woman who’s plagued by prophetic dreams. These dreams lead to a fateful meeting with a burgeoning hippie cult called the Family of the Sun, whose leader claims to have met the divine.

Sex, drugs, and blood magic will lead Teresa to the truth about the Family, its enigmatic leader, and the dark secret behind her dreams.

Love, destiny, betrayal, lies, and the lengths to which we would go in order to protect the ones we love collide in this new erotica thriller from acclaimed writer and artist Maria Llovet (Faithless, Heartbeat).

Go back to the summer of 1996, before Buffy Summers arrived in Sunnydale and the newly anointed Vampire Slayer flees to Las Vegas to make sense of her life. Unfortunately, a twisted coven of vampires have their own plans for The Strip.

Upon her return, her parents put her under lock and key, and while it’s nice to not have to slay vampires and demons night after night, Buffy soon finds her respite is short-lived.

Mal has handed himself into the Alliance… but it turns out he’s not the one they want. The infamous Ma Reynolds – that’s Mal’s mom – is at the top of the Alliance’s Most Wanted, and if Mal doesn’t get to her first, the Alliance will!

Will a dark secret from Zordon’s past spell the end of the Power Rangers?

In the aftermath of Zedd’s assault on Angel Grove and the revelation of the true identity of the new Green Ranger, can the Mighty Morphin Power Rangers survive a betrayal by one of their own?

Uncertain of his role as the Rangers’ mentor, Zordon will turn to an old friend for help… leading him to choose between ancient loyalties and Earth.

Can the Omega Rangers and Drakkon save the universe in this latest chapter of the UNLIMITED POWER era?

Reeling from a crippling defeat at the hands of their new enemy, the Omega Rangers retreat to Safehaven in search for a way to stop the Empyreals.

Drakkon, previously their greatest enemy and now their tenuous ally, may provide the answers they seek… or betray them.

The Emissaries have their own plans, which may hold the key to saving the entire universe!

Discover the inner workings of the House of Slaughter in this new horror series exploring the secret history of the Order that forged Erica Slaughter into the monster hunter she is today.

You know Aaron Slaughter as Erica’s handler and rival. But before he donned the black mask, Aaron was a teenager training within the House of Slaughter.

Surviving within the school is tough enough, but it gets even more complicated when Aaron falls for a mysterious boy destined to be his competition.

Dive deeper into the world of Something is Killing the Children in this first story arc by co-creator James Tynion IV (The Department of Truth, The Nice House on the Lake) and co-writer Tate Brombal (Barbalien), with art by rising star Chris Shehan (The Autumnal) and co-creator Werther Dell’Edera (Razorblades).

With battle lines drawn, who can a Slayer really trust?

When Buffy suffers a devastating loss at the hands of the Multiverse’s Big Bad, Kendra and Buffy are left questioning if they can ever trust each other again.

Meanwhile, Faith uncovers secrets from her past that may not be what they seem.

What ancient and mythical danger awaits Bridgette, Duncan, and Rose as they seek Rose’s parents in the city of Bath?

To complicate matters, an Arthurian knight pursues them with an offer for Rose and Duncan – join the Round Table or face death.

If they survive the encounter, they’ll be pulled into the next phase of Bridgette’s plan… finding the “lair of the greatest hunter the accord has ever seen.”

What revelations will B. unlock when his handler’s life hangs in the balance?

During a mission to retrieve an artifact from a museum in the midst of an ongoing civil war, B. saves his handler, Jim, from a chopper explosion.

As he races to get his gravely injured friend to the extraction point, B. reveals new secrets from his past, but little does he know that Caldwell and Diana are secretly recording everything.

Can Avery clear his name and find out what’s really happening to him?

On the run, Avery must elude the cops for the accidental death that he’s sure to be blamed for.

William, Avery’s brother, tries to convince him to explain that it wasn’t his fault, but Avery is skeptical the authorities will believe a Black man… and terrified at the possible truth behind the incident.

The newly crowned Duke Leto Atreides has been framed for a crime he did not commit and must risk everything to prove his innocence to Imperium’s royal houses. Will it work or will Baron Harkonnen’s evil plan finally come to fruition?

The Bene Gesserit assert their influence once more, having predicted a great importance in the Atreides bloodline, one that will influence the coming of their messiah – the Kwisatz Haderach!

Still uncertain about what she saw in Pip’s office, Joey confides in Kitty…but Kitty’s response only confuses her more, leaving Joey with no choice but to play along with the family.

Until Fourth of July, when at a party Joey suspects what she thought she saw then is happening again.

Can Joey come to terms with what is really happening in Crestfall Bluffs… and can she still walk away alive?

What happens when your worst enemy becomes your only ally?

With her sights set on freeing Leonard, Kaylee’s team chases the Jefa across the Earth That Was only to be led directly into a trap.

But everything changes when they get attacked by plunderer robos who have been tracking both groups… to exterminate them all.

Now, Kaylee must team up with the Jefa in order to fend off the robos. But if they survive this, how will they survive each other?

The final battle is here! But what will Luck have to do with it?

The team takes on Cassiopeia, the embodiment of Bad Luck, with Joseph’s new form unifying them like never before.

Will Good Luck prevail…and is that even what the Unfortunates want?

The Guilds of Ravnica, now aligned against a foe that threatens the entire Multiverse, must defend Ravnica united!

Fortunately, the warriors of the Guilds have the legendary Planeswalker, Jaya Ballard, by their side to repel the mutant horrors of her ancient enemy.

Will Jaya and our cabal of Planeswalkers be able to reach Jace Beleren before the herald of [REDACTED] does?

Mamo’s final trick is revealed! Will Orla be able to escape the trap her grandmother set from beyond the grave?

And with tensions rising, will Orla and Jo’s burgeoning friendship survive, or is Orla going to have to face Mamo’s angry spirit all on her own?

Orla struggles with the fact that if she saves Haresden, she’ll be stuck there forever, but if she doesn’t, the town will fall to chaos and be destroyed. Which will she choose, or is her destiny already written?

What happens when the monster within the shadows awakens?

After being drugged and abandoned on a beach, Marion struggles with inexplicable and frightening changes to her body while her sister, Wendy, continues to try to fit in with the other women at the commune.

As they both learn more about the commune and its mysterious leader, Diana Spiro, each new revelation brings the true nature of her motivations and teachings to light.

Rescued by the Power Rangers, Candice reveals there’s a deeper threat to earth than previously realized!

The revelation will force Zordon to grapple with his ancient past and for the sake of Earth, make a plea to a potential ally no one expects.

But Tommy takes matters into his own hands which leads him to a collision course with his former allies!

The Omega Rangers try to reach the Spectrum II, but Drakkon has other plans that will cost them dearly.

After the shocking events of last issue, the Empyreals add to their ranks before being called back to do their master’s bidding.

As a departing gift they unleash their full might on the alien planet. If the Omega Rangers can survive, they’ll find themselves stranded without hope of survival.

Can they fight their own insecurities and deepest fears long enough to find a way out?

WE ONLY FIND THEM WHEN THEYRE DEAD #9

How far are the Worshippers willing to go for the cause?

Bristow has always done whatever is needed to rise through the ranks of the security services, but now he’ll make his move and reveal his true ambition. 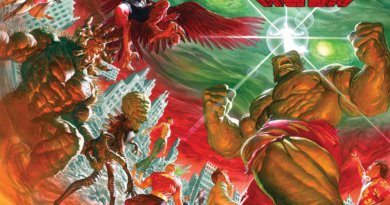 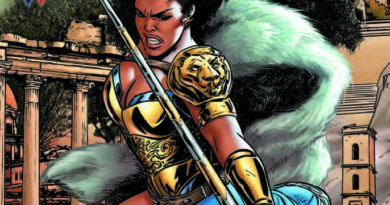 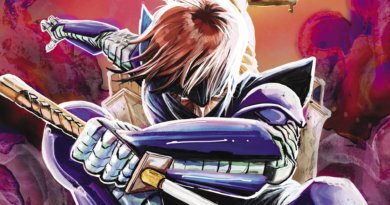