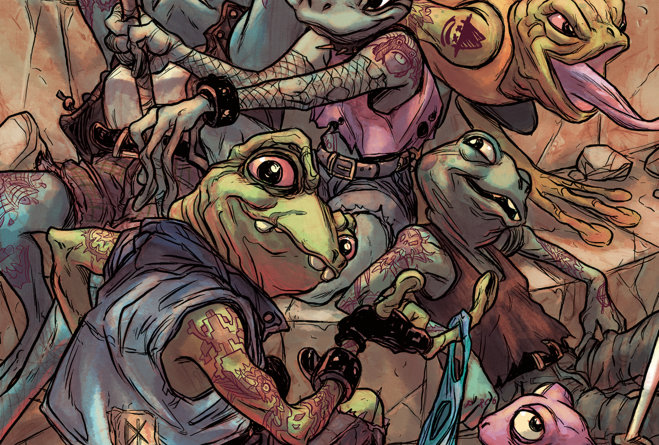 The IDW February 2022 Solicitations are here! Transformers gets another hardcover, Hellboy gets a treasury edition, TMNT continues, as well as The Last Ronin, and more!

The Captain Action comic, based on the classic action figure, has been out of print for more than fifty years. Written by Jim Shooter and Gil Kane and drawn by Kane and Wally Wood—a legendary roster of talent if there ever was one—containing the origin of Captain Action and Action Boy, and featuring their arch-nemesis, the diabolical Doctor Evil!

All five original issues are collected in this volume and have been meticulously scanned from crisp first-generation stats, and painstakingly recolored (using the original comics as guides), beautifully representing a long-lost treasure! 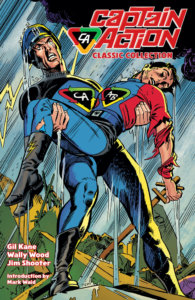 Transformers, Vol. 5: Horrors Near and Far

The bold new vision of the Transformers universe continues! The war that will define Cybertron sees Autobots and Decepticons alike face challenges like never before.

The war grows desperate for Optimus Prime’s Autobots. With energon and morale running low, they seize upon a dangerous plan to boost Jumpstream’s teleportation abilities. Meanwhile, Bumblebee enters a criminal alliance and Megatron learns that his former mentor holds an artifact that could be the key to the Decepticons’ victory.

Next, when a criminal group known as Mayhem threatens the Speedia 500, the biggest race in the universe, the Wreckers—a covert ops squad—show up to keep the peace. But can they maintain their covers in front of the cameras?

Then, the fall of the tether that anchored Cybertron’s moon was a critical step on the road to war, and the ancient Titan Vigilem caused it. Now the only other active Titan, Lodestar, and her cityspeaker, Lightbright, must hunt him down!

And finally, when Starscream follows rumors of a disembodied spark in the desert, what he finds will horrify and rattle him to his core! Join Lina, Milo Graf, and Crater for one last adventure to Vader’s Castle! These fun, but eerie and horror-packed tales take you through the creepy side of the Star Wars galaxy.

The ghosts of Vader’s Castle are haunting everybody’s dreams! First, Milo has been having nightmares about zombie droids, with  special appearances by Anakin Skywalker, Padmé Amidala, and Jar Jar Binks. Then, Lina runs into Jaxxon, who reveals that he, too, has been having troubling dreams of vicious Wookies bigger than mountains! Plus, catch up with Hudd and Skritt as Hudd deals with dreams concerning the Spirit of the Swamp, a gilled monster that terrorizes Dagobah! But Lina isn’t immune to the nightmares either—as her dreams are visited by the galaxy’s most threatening villain!

In the finale, Lina, Hudd, Skritt, and Jaxxon race to Mustafar to save Milo and Crater. Will the group be able to fight the ghosts that still haunt the castle, or will the galaxy forever be bound to suffer from the wrath of the Ghosts of Vader’s Castle?! An even longer time ago, in a galaxy far, far away, the adventures continued for Lula and her fellow Padawans in the Republic’s golden age!

The High Republic is an unexplored period in Star Wars history, set hundreds of years before the events of the Skywalker Saga—when the Jedi were at their height, and Master Yoda was much younger and still training Padawans in the field.

It is here that we find Jedi Padawans Farzala and Qort, who are taking a break from the ongoing battle against the dangerous marauders known as the Nihil. As part of a secret mission, they join an aging Jedi Knight on The Vessel to negotiate a peace treaty with the Hutt crime family. Hey, what could go wrong? As it turns out: literally everything. The Shredder returns and Mutant Town is in danger of being destabilized by forces outside and in!

Oroku Saki has been to hell and back, but will he now come to the Turtles as friend or foe?

Meanwhile, April makes a stand against Baxter Stockman—with dangerous consequences—and the Mutanimals take drastic steps that will put them on a collision course with the TMNT!

Then, as a protest at the Mutanimals HQ turns violent, TMNT allies and enemies rush to take advantage of the situation, but not before Old Hob makes a surprise decision that will shake allegiances! 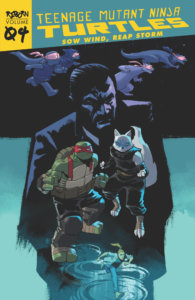 Mike Mignola’s Hellboy in Hell and Other Stories Artisan Edition

Mike Mignola is one of the preeminent comic creators of the past several decades. His career was already firmly established with his outstanding work on characters like Batman, Wolverine, and a myriad of beautiful covers… and then came Hellboy. Mignola’s iconic creation struck a chord with fans from the very start and has not abated in the years since the character’s debut.

This Artisan Edition features the first five issues of Hellboy in Hell as well as a wealth of historical material: the first three Hellboy stories—the two initial four-pagers that introduced the character and the ten-page story from John Byrne’s Nextmen #21—plus The Corpse, and two other tales selected by Mignola for inclusion.

An Artisan Edition endeavors to mimic as closely as possible the experience of viewing the artist’s original art. Nearly every page presented within has been scanned in color, allowing the reader the ability to see the work as never before. Ink gradients, corrections, margin notes, and more—all the subtle nuances that make original art unique, are clearly visible. The prelude to Baldur’s Gate III reaches its ultimate conclusion! Minsc, Boo, Delina, Krydle, Shandie, and Nerys have fought terrible foes, but this one may be the worst. With one of their own facing a fate worse than death, can the Baldur’s Gate heroes stop the Mindbreaker? And if they do, will it even make a difference for their friend? This is it, folks—the next great G.I. Joe: A Real American Hero event! As Cobra remains busy establishing its corrupt casino operations on Cobra Island, the warriors of G.I. Joe are equally busy attempting to covertly infiltrate their arch-enemy’s latest evil scheme. New and classic heroes and villains will fill the pages (including some shocking appearances!) as the fan-favorite creative team of living legend Larry Hama and SL Gallant kick off the Road to Issue #300! They are the best of the best—elite warriors from all walks of life, with the sole mission of ensuring liberty and justice for all freedom loving citizens of planet Earth! They are G.I. Joe. and these are some of their greatest adventures ever, presented in one specially priced 100-page comic-book collection. Written by living legend Larry Hama, illustrated by various superstar artists, and featuring brand-new cover art by Daniel Maine! 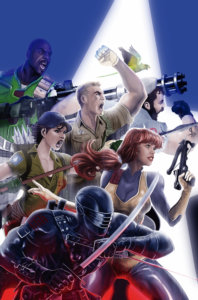 G.I. Joe is the code name for America’s daring, highly trained, special mission force. Its purpose: to defend human freedom against Cobra, a ruthless terrorist organization determined to rule the world… well, you know the story!

But now, Cobra might have found their most versatile weapon yet! Can even G.I. Joe stop the Aladdin Initiative? Find out in this special Saturday-morning send-up, based on the classic 1980s cartoon and brought to you by the superstar creative team of Erik Burnham, Dan Schoening, and Luis Antonio Delgado (Ghostbusters, Godzilla: Monsters & Protectors)! The epic finale is here! As Twilight, Starlight Glimmer, the rest of the Mane Six, and their new friends try to put an end to the evil Smooze tearing friendships apart, Grackle and Dyre take their fight to Ponyville! The witches invade in the final issue of My Little Pony: Generations! Rick and Morty vs. Dungeons & Dragons: The Meeseeks Adventure one-shot

The worlds of Dungeons & Dragons have their share of blue, wish-granting djinn, but none is as desperate to please, persevering, or unstable as Mr. Meeseeks! Watch what happens when a pair of hapless rogues stumble upon the ultimate magic lamp. The road to issue #50 continues here! Enjoy a TEN-ISSUE-LONG-ADVENTURE leading up to the EPIC SHOWDOWN in milestone issue #50.

The Chaotix are on the case! Central City has been turned upside-down by unmanageable traffic, and reports of lightning and water moving in odd ways have the city’s emergency services scratching their heads. Is it a sewer-dwelling crocodile, a pair of unruly brothers, or something more sinister? Whatever it may be, Vector, Espio, and Charmy are sure to uncover the truth. Dive deeper into the world of Star Trek with the first of several extra-long issues focusing on the memorable aliens of the franchise!

To begin: the story of Kahless the Unforgettable, from the death of his coward brother Morath to his victory at Three Turn Bridge. Witness history unfolding in this can’t-miss issue! Picard continues his relentless quest towards Faundori and an unstoppable armada, refusing to cower even in the face of threats coming from inside the Enterprise. Will he survive the journey to the famed planet? Or will his ambitions spell his doom?! 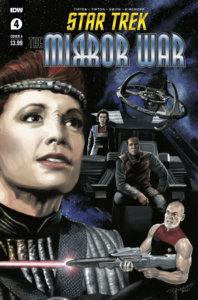 Join Daniel José Older and Harvey Tolibao in this emotional finale to phase one of The High Republic Adventures!

With their latest mission behind them, the Padawan face their greatest challenge yet: the future. Farzala and Qort are ready to take the next steps, but Lula can’t shake her emotions, as is the Jedi way. She’s been trained for battle, for diplomatic relations, for rescue missions… she was never trained for a heart that aches for more. Through it all, though, they are guided by the wise words of the Jedi: for light and for life. 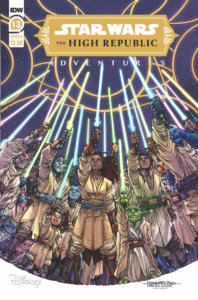 The battle between the TMNT and the Punk Frogs rages through Mutant Town, and there can only be one victor! Meanwhile, tensions come to a head between the Utroms and the Triceratons, and the ramifications will have a big impact on NYC! 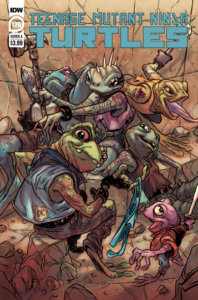 Catch up on the life of the newest Ninja Turtle—Jennika! Once a Foot Assassin determined to kill Splinter, Jennika soon embarks on a mission of redemption and unforgettable change. Dig into the stories that made Jennika the new sensation of the mutant world with this brand new collection of her greatest stories! 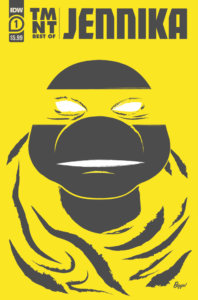 The jaw-dropping finale to the biggest TMNT story ever is here! One final showdown between mutant and Foot Clan will determine the fate of NYC. Will the Ronin be able to find some measure of peace or is he fated to meet the same end as his brothers? Don’t miss one of the most epic battles in TMNT history and the conclusion to the comic book event of the year! 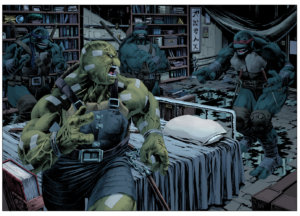 Shattered! The Autobots have withdrawn to the Crystal City and the Decepticons are at their gates! But with Optimus Prime and Bumblebee finally reunited, will this be the Autobots’ last stand or their greatest hour?! Don’t miss the other side of the epic story too, in February’sTransformers: War’s End too! The Beast Wars rage on! After the Maximals’ assault on the Predacon base, both sides are looking for a win. When an energon treasure trove is unveiled, the race is on! It’s a good thing the Maximals have Cheetor on their side—or do they? The Three-fold Spark has returned and nowhere on Cybertron is safe!

Exarchon, who single-handedly started Cybertron’s last war, walks among the living again. Reunited with his former generals, Shockwave and Skywarp, he seeks once more to conquer Cybertron! But there may be hope… if Cyclonus can convince Megatron to work with the Autobots! The can’t miss companion to the Transformers ongoing series! Usagi and Yukichi are on the trail of a murdering samurai band but have to split up when they reach a crossroad. Usagi catches up to the samurai but even he cannot stand up to six accomplished swordsmen by himself. Meanwhile, Yukichi meets up with an even greater danger! This issue reprints another classic Usagi tale, “A Kite Story”! The paths of three individuals: a kite maker, a gambler, and Usagi, intersect during a kite-flying ceremony. Each has a different agenda, and they will all change each other’s lives in this high-flying story! 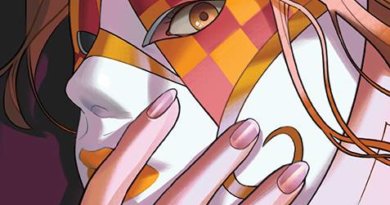