FIREFLY RETURN TO EARTH THAT WAS HC VOL 03

In this thrilling conclusion, the crew of the Serenity rally to pull together the struggling community that they’ve found themselves protecting.

But even surrounded by bandits and facing a hostile environment, the crew soon learns that they might have an even bigger challenge on the horizon… the reemergence of an old threat that they will have to contend with once and for all…

Hanuka’s rich storytelling blends humor and pathos to deliver a nuanced and moving portrait of self, family, and society.

Against vicious odds, Hannah completes the first step in revenge against the Chimera, with deadly results.

Vanessa confesses her knowledge of a destiny they can’t avoid, and a sacrifice they’ll have to make.

Meanwhile, a defector from the Chimera continues to help Hannah. But as more of her humanity slips away in her grief and rage, a hauntingly-familiar voice returns her to a world of unimaginable pain.

The first collection of the bestselling expansion of the world of Something is Killing the Children is here!

Discover the clandestine and perilous inner workings of the House of Slaughter in this new horror series from co-creator James Tynion IV, co-writer Tate Brombal, and illustrated by rising star Chris Shehan and co-creator Werther Dell’Edera.

Learn the secret history of the order that forged Erica into the monster hunter she is today… and learn the tragic backstory of her handler and rival, Aaron Slaughter.

THE TRUE EVIL BEHIND THE EMPYREALS REVEALED!

Discover the power behind the Empyreals, fracturing the Power Rangers like you’ve never seen before as they mourn the loss of one of their own.

Even as an all-out assault from the Empyreals is imminent, the Power Rangers must defend Angel Grove from the constant threat of Lord Zedd and his minions.

But saving Angel Grove, Earth, and the universe itself, means setting aside old rivalries, finding unexpected allies, and discovering who their true enemies are with the stakes being higher than ever!

After years of fighting against the forces of evil, Buffy Summers finds herself succumbing to the burden of bearing the Slayer mantle.

To help his Slayer, Rupert Giles is willing to risk a return to chaos magic, and with Willow’s help, they attempt a spell to remove the trauma from Buffy’s psyche.

The effects backfire though, and leave Buffy unable to remember her past, or her purpose!

With Sunnydale under attack, a new Slayer must rise to protect it, while Buffy’s friends race against the clock to restore her true self.

Return to Wonderland in this twisted sequel by superstar artist and writer Dan Panosian (An Unkindness of Ravens, Canary) perfect for fans of Mirka Andolfo’s Mercy and Luna.

Alice first visited Wonderland as a child. Now an adult, it’s her only escape from a cold, strange reality she finds herself living in.

But in order to return to her fantasy world, she’ll need something stronger than mushrooms that change her size, and is forced to resort to crime to feed her growing addiction.

Will Alice choose to escape from her uncaring family and childhood trauma in Wonderland, or find the courage to face her demons in the real world?

Delve even deeper into the Magic: The Gathering universe with comic and screenwriter Mairghread Scott (Transformers, Guardians of the Galaxy) and artist Fabiana Mascolo (Firefly: Brand New ‘Verse)! !

While our heroes have many dangers to face throughout the multiverse, the powerful Necromancer Liliana Vess returns to her new home as a professor at the greatest college of magic in the Multiverse.

But she doesn’t return alone. Sensing the presence of a distant planeswalker calling for help… one with the power to save, or destroy, entire planes, puts her on a collision course with the diabolical machinations of the Tezzeret, the Master of Metal…

Following the events at the monastery, Jayne is held hostage by the mysterious and dangerous criminal known only as the Tax Collector.

Mal and Kaylee try to negotiate a trade… and it goes about as well as expected from the crew of the Serenity.

But they have a plan! And with a little (or a lot) of luck, they might just be able to rescue Jayne and deliver the medical supplies stolen by the Tax Collector’s gang.

What is the true identity of the evil entity residing in the spirit house?

A traumatized Oz is discovered living upstairs in the hotel, kept secret and safe by Lorne.

Oz delivers a grave warning of a great evil drawing near… one with the power to annihilate not just our universe, but every universe in existence…

Toba and his friends have split up. He’s entered the Elseverse in search of his father, while the rest of the group works to take down the mind-control device threatening all of Buckhead.

But that’s not all they’ll have to contend with… as an ancient power once thought defeated is freed from the Elseverse, spelling almost certain doom for them all!

Experience the epic conclusion to this incredible adventure as the mystery of the Eben sword is finally revealed.

Faith realizes that Poppy and Louis have been hiding a dark secret from her, and when Louis appears with a mysterious bundle, Faith’s entire world will be shaken to its core…

Experience the moving tale of a Lipan Apache girl named Rose through four pivotal stages in her life: from a lonely child, to a ballet prodigy, her struggles as an adult, and finally her time as an older woman.

This touching and lyrical love letter to family, heritage, and finding your true self is sure to delight readers of all ages.

The game has changed… A key player has been knocked off of the board for good, and the Killer finds himself in the midst of an escalating crisis.

The Killer’s handler within the French government tasks him with tracking down the source of illegal guns fueling local gang wars… one with dangerous ties to a hotshot political figure.

In Zendikar, tomb-raiding and death-defying adventures await as our three heroes finally learn to work as a team-with Chandra Nalaar as the unexpected and reluctant leader.

In the hazards surrounding the Sky-Ruin, they encounter [REDACTED], pushing Garruk’s hatred to the limit and sending the three into a reckless pursuit in the dangerous ruins.

Who is this mysterious figure that’s caught Garruk’s ire? And what new perils await in the depths of this ancient plane?

With the combined efforts of Promethea and the Zords protecting the Power Chamber, Rocky, the Red Ranger, and Matt, the Green Ranger, wait in tense anticipation for the return of the Away Team.

Emotions run high as Zordon acknowledges a hidden history involving him and Promethea, and how much the War has affected him, while Rocky is torn on different responsibilities that might be irreconcilable without help…

Zack and Trini bring an unexpected guest back to Safehaven after a battle, while Jason and Yale encounter a rogue [REDACTED], determined to avenge the destruction of his home planet!

On the Masterforge, the Legendary Ranger Teens and the Morphinaut feel the aftershock of the smoking crater on Earth’s surface.

At the mysterious crash site, their new powers and skill sets are put to the test against a horde of Foot Soldiers! But what happens when their powers start to fail… and even begin to turn against them?

In the wake of an unthinkable tragedy, the Seekers find themselves capturing more and more cases.

But with Eva struggling to cope with the loss of a trusted ally, will The Order be able to stop the inevitable in time?

SOMETHING IS KILLING THE CHILDREN #22

Outside London, the shadowy figure on Erica’s trail relays information to their enigmatic superior about the rogue agent in the House of Slaughter.

Meanwhile, a town finds itself in the clutches of an elusive serial killer, and the only living witness to the crimes is a frightened child.

Erica investigates the grisly scene of the most recent murder, ignorant of the hostile forces drawing in around her… 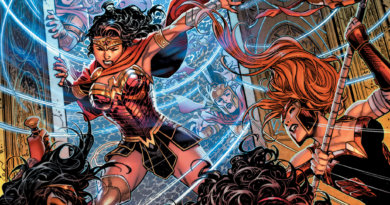 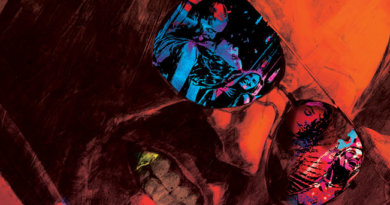 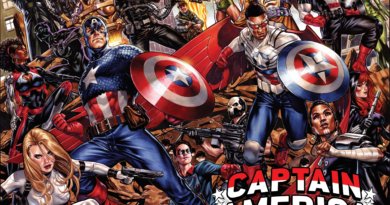