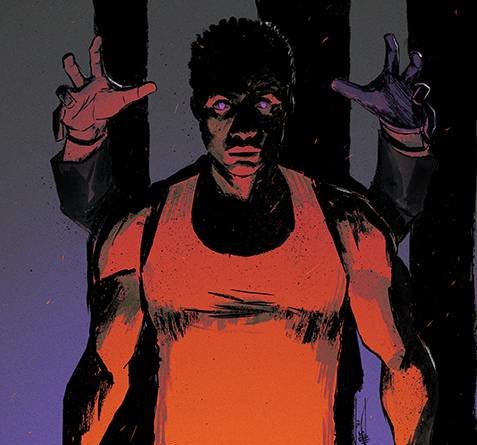 
The Boom Studios November 2021 solicitations are here! Firefly gets another hardcover, Ram V’s Many Deaths of Laila Starr gets its first TPB, and much more!

FIREFLY RETURN TO EARTH THAT WAS HC VOL 02

The Firefly saga featuring the original crew of the Serenity continues!

In an attempt to evade the Alliance the crew of Serenity find themselves stranded on The-Earth-That-Was, a strange world filled with ancient artifacts, a new civilization and…maybe some semblance of hope.

Will Captain Kaylee be able hold her crew together and not strangle Captain Mal in the process? Does Zo find out what it truly means to be a Washburne? Can the legacy of Shepherd Book unite Lank and Mal and a new world?

MANY DEATHS OF LAILA STARR TP

Humanity is on the verge of discovering immortality. As a result, the avatar of Death is cast down to Earth to live a mortal life in Mumbai as twenty-something Laila Starr.

Struggling with her newfound mortality, Laila has found a way to be placed in the time and place where the creator of immortality will be born.

Will Laila take her chance to stop mankind from permanently altering the cycle of life, or will death really become a thing of the past?

A powerful new graphic novel from award-winning writer Ram V (These Savage Shores, Swamp Thing) and artist Filipe Andrade (Captain Marvel) that explores the fine line between living and dying through the lens of magical realism.

Collects The Many Deaths of Laila Starr #1-5.

The Slayers continue to struggle with their new reality while Anya and a new fan-favorite villain, recently arrive in Sunnydale, vie for control of the Watcher’s Council!

The true nature of a plan is revealed and Scoobies and Slayers alike must band together to stop them, but not everyone will do so willingly.

And what sacrifices will have to be made to save Buffy from a world-shaking discovery as a new Big Bad makes its presence known?

This collection features a very special story featuring everyone’s favorite Watcher like you’ve never seen him before… Giles the vampire.

SOMETHING IS KILLING THE CHILDREN TP VOL 04

What events brought Erica to the House of Slaughter? And what did she have to do to join the Order of St. George?

Erica Slaughter went to hell and back in Archer’s Peak, but that may be nothing compared to the events that forged her at the House of Slaughter.

Collects Something is Killing the Children #16-20.

What happens when the legacy of Frankenstein’s monster collides with the sociopolitical tensions of the present-day United States?

Mary Shelley’s Frankenstein beseeched his creator for love and companionship, but in the 21st Century, the monster has long discarded any notions of peace or inclusion. He has become the Destroyer, his only goal to eliminate the scourge of humanity from the planet.

In this goal, he initially finds a willing partner in Dr. Baker, a descendant of the Frankenstein family who has lost her teenage son after an encounter with the police.
While two scientists, Percy and Byron, initially believe they’re brought to protect Dr. Baker from the monster, they soon realize they may have to protect the world from the monster and Dr. Baker’s wrath.

Written by lauded novelist Victor LaValle (Eve, The Ballad of Black Tom), Destroyer is a harrowing tale exploring the legacies of love, loss, and vengeance placed firmly in the tense atmosphere and current events of the modern-day United States.

What is the true origin of the Phantom Ranger? And what is his connection to the Morphin Grid?

From the moment he first appeared 24 years ago, fans have wondered about the origin of the mysterious Phantom Ranger. Questions which have never been answered, until now…

BOOM! Studios proudly presents a limited series event that will delve into the deepest origins of the Power Rangers Universe. Origins that have the Phantom Ranger at their heart.

Dizzy wants to be the best! But in the case of everything she’s tried, including roller skating, this teen has only been able to achieve one thing – disaster.

Just when she is ready to pack it in, everything changes when the Negatrixes attack, forcing her to take up the mantle of ‘Burb Defender!

But if she wants to save the world, she’s going to have to assemble the coolest skating crew in the ‘Burbs.

From New York Times bestselling author Shea Fontana (DC Super Hero Girls, Wonder Woman Rebirth) and acclaimed artist Celia Moscote (Juliet Takes Breath) comes an aspirational new series, perfect for fans of Save Yourself! and Rollergirl, that reveals a true hero is nothing without her friends.

When the fate of the Multiverse is at stake, what game will the scheming Master of Metal play?

Tezzeret of Esper, the cruel artificer now free from his former master Nicol Bolas, the God-Pharaoh of Amonkhet, has traveled across the Multiverse seeking the answer to a question only he knows.

Once he finds it, he will manipulate anyone necessary and do whatever it takes to claim his prize… but to what end?

Writer of the upcoming Magic: The Gathering animated series, Mairghread Scott (Transformers: Windblade), and artist Jorge Coehlo (Rocket Racoon) debut the Master of Metal in a 48-page one-shot igniting the spark of events that will ripple throughout the Multiverse in 2022!

REGARDING MATTER OF OSWALDS BODY #1 (OF 5)

Where is Lee Harvey Oswald’s body?

The Kennedy assassination is a rat’s nest of conspiracy theories: mafia involvement, the second gunman, government cover-up… but the most important chapter of this sordid tale may just be the theory that the body buried at Oswald’s Rose Hill gravesite is not actually Lee Harvey himself.

Meet the ragtag group of “useful idiots” who are unwittingly brought together to clean up the crime of the century – a wannabe cowboy from Wisconsin, a Buddy Holly-idolizing (former) car thief, a world-weary Civil Rights activist ready for revolution, and a failed G-Man who still acts the part – and specifically, regarding the matter of Oswald’s body.

Can Buffy get by with a little help from her friends in this second chapter of We Are The Slayer?

If Buffy is to thwart the Multiverse’s Big Bad, she’ll need to recruit across the Multiverse for allies, including from very unexpected sources!

Meanwhile, will an unexpected group of friends be able to rescue Faith from Silas before his terrible revelations about her past break the Slayer?

Are the horrors of Avery’s past to blame for his unique condition or or is there something more sinister at work?

Avery’s symptoms continue to worsen as he races against his pursuers to reach Dr. Carlisle and confront him about what could possibly be happening to him.

But a shocking turn of events prompts Avery’s condition to manifest and intensify with deadly consequences, which will threaten everything Avery holds dear.

Now the 81st Padishah Emperor of the Known Universe and imbued with the entire power of the Imperium, Shaddam will decide the fate of newly crowned Duke Leto Atreides.

But his decision will inadvertently cement the genocidal hatred of Baron Harkonnen for House Atreides!

Even as Joey struggles to make sense of everything she’s seen, what role her beloved Astor has in it, and what it means for her relationship with him, Crestfall Bluffs is a flurry of activity preparing for the Thistleburn Unveiling Gala Party.

When Joey intervenes in a situation she doesn’t fully understand, it will bring everything to a head in the most unexpected way!

Erica Slaughter isn’t the only member of the House of Slaughter to have made sacrifices in order to become the monster hunter she is today.

As a teenager, her handler and rival Aaron finds himself with a new roommate, the mysterious “transfer student” Jace Boucher.

To initiate his training, Jace must prove his loyalty to the House of Slaughter through a binding ritual… a ritual that few survive.

Tying directly into the events of Magic: Master of Metal #1, Tezzeret enters the fray and brings with him vital information to the cabal of Planeswalkers defending Ravnica regarding [REDACTED]!

Only Tezzeret knows the truth about why Jace Beleren was attacked and why he is the key to saving the Multiverse from the utter destruction coming to Ravnica.

But that secret and what it means force Jace, Vraska, Kaya, and the allied Guilds of Ravnica to make an unthinkable choice… linked to the very crimes that Tezzeret seeks to be pardoned for in exchange for his help!

Is friendship more powerful than fate?

Mamo’s angry spirit and moth familiar prove to be too much for Orla and Jo and it starts to look like there is no way out of this except to do what Mamo always wanted.

Will Orla complete the circle and embrace her destiny as the new witch in town, becoming as much a part of Haresden as the tides, or is there another way?

What makes a monster?

Marion’s terrifying transformation is nearly complete, but she finds utility in it, turning the tables on the predators harassing women in local bars.

When these men go on the hunt for revenge, a huge mistake pushes Marion into a fully monstrous form… and there will be hell to pay.

It’s all been building to this, the inevitable showdown between the Power Rangers and their allies and the biggest threat they’ve ever faced – the Empyreals.

And yet, the shocking conclusion of the first year of Mighty Morphin may have ended the war before it even began decimating the very heart of the Power Rangers.

Can the Rangers move past their betrayals in order to save Earth and the universe itself?

Acclaimed Power Rangers writer Ryan Parrott, along with artist Marco Renna, debuts the Power Rangers event that will decide the fate of every Power Ranger across the universe – The Eltarian War!

Will a shocking turn of events be enough to turn the tide of the entire world?

The war continues to rage across Britain as both Arthurs prepare to face one another for ultimate rule of the land.

As Duncan, Bridgette, and Rose arm themselves for what’s to come, a surprising betrayal threatens even the most carefully laid plans!

The Omega Rangers, including their unexpected savior the NEW Blue Omega Ranger, race against time to beat the impending Empyreal threat to Earth.

But can they deliver the critical secret they’ve uncovered to Zordon before it’s too late? 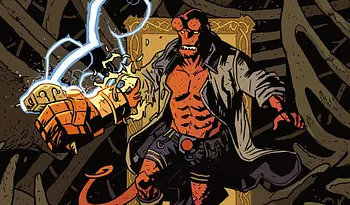 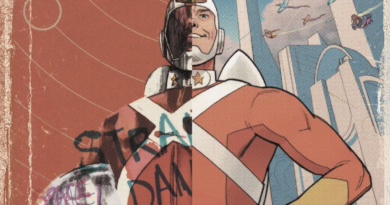